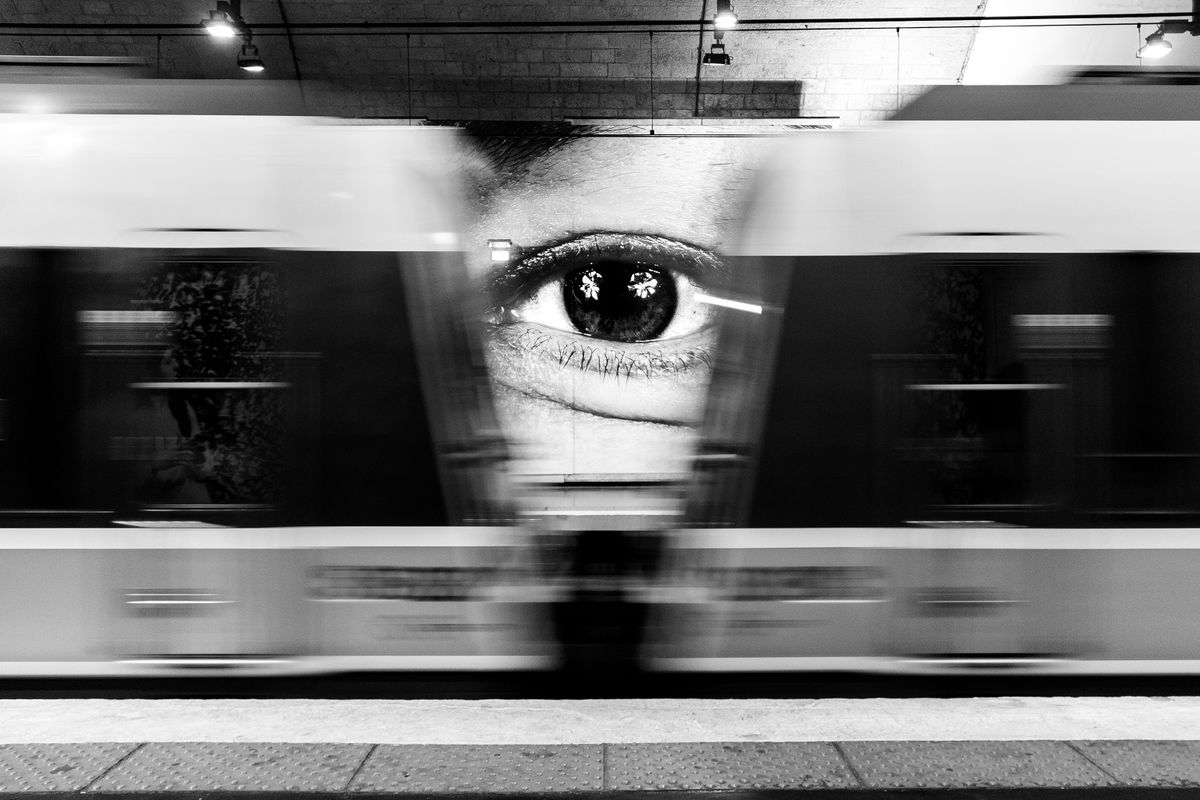 Compagnons de voyage | The series “Subway travel companions” takes place in the Paris metro in which the author spends long hours. Fruit of many trips, it began in November 2017.
Travelling in the subway means travelling to another world. It is to know a universe crossed as fast as possible, transition quickly forgotten between a place of departure and a destination which alone seems to count.
A space-time where life, human relations, slow down, fall asleep, sometimes stop.
Beyond the crowds that cross each other without seeing one another, there seem to be other inhabitants, silent, attentive, curious, playing with our indifference.
This series tells these collisions between the indifferent and anonymous crowds of the metro and street furniture.
Through its posters, the decor of the trip seems to come alive and send back an uncompromising analysis of the enclosed world that constitutes the metro.
A vision sometimes amused, sometimes severe the flow of travellers.
It is this face on the wall that catches the traveller’s eyes and sends him a call.
It is this playful figure who presents himself as a friendly neighbour trying to open communication through his window. It is this eye that threatens or begs.
It is these placarded humans who challenge, accuse, enjoy themselves.
Removing themselves from their cold walls, these appearances all have in common to accompany us, to question our journey, to propose another way, to invite us to engage a little heat to make the journey live.

BIO | Sébastien Durand is an amateur photographer since 2017. Settled in the Paris region, he assiduously frequents the metro, a parallel world in which he naturally made his first shots and began his self-taught photography apprenticeship. The unexpected encountered oriented his work towards street photography.
A finalist place in the SPI (Street Photography International) Awards in 2018 encouraged him to continue and deepen his work. Several other awards will be awarded (The Independent Photographer finalist, Urban Photo Awards 2018 and 2019 finalist, Xposure finalist…) and many of his photographs exhibited or published.
Today, Sébastien Durand regularly works on the street or in the subway, seeking in the middle of the crowd and the urban environment what the street says about us and our society. He develops two themes, one in black and white devoted to life in the Paris metro and a second in color offering a more ironic or amused vision.