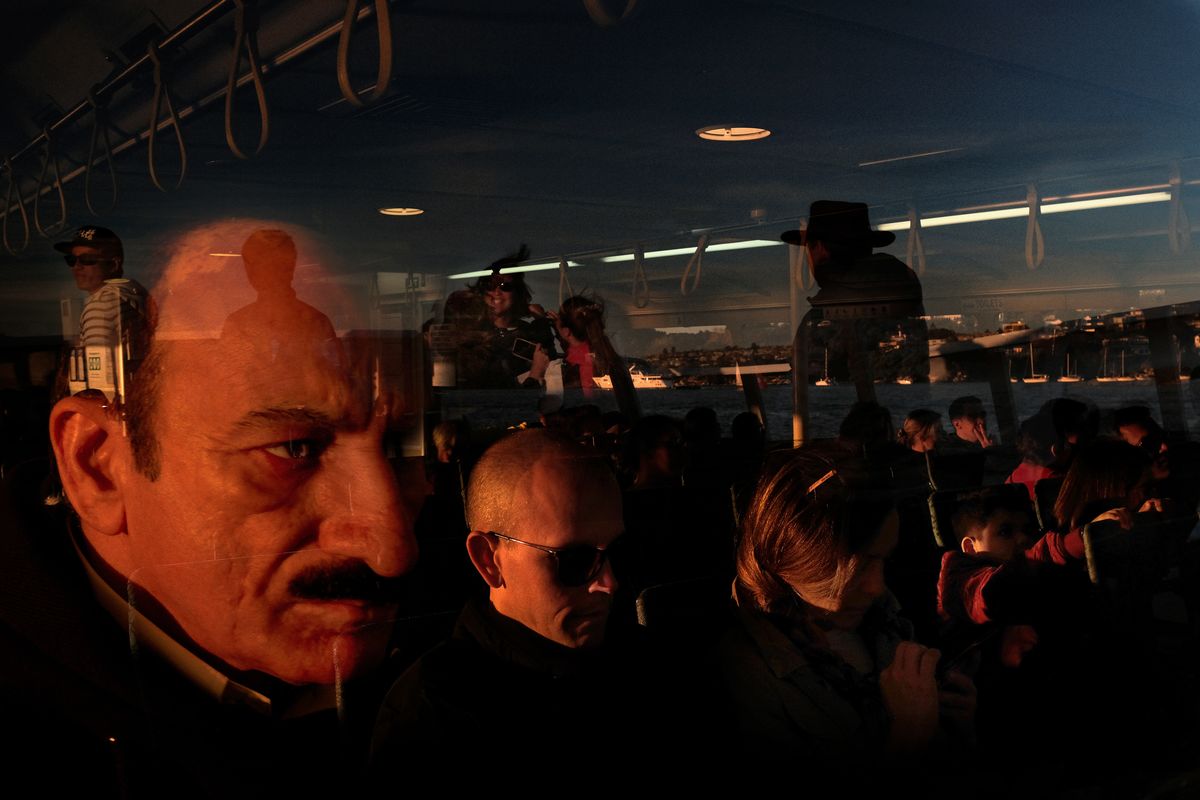 Off Quay. This ongoing series first took shape in 2014 when I realised that during the winter months I’d always end up at Circular Quay to catch the final shards of light as it spears through the architecture of the train station, ferry terminals, and harbour bridge.
The harbour precinct, Opera House, and its surrounds attract an array of local and international visitors. Equally, I became fascinated with the vibrancy of the terminus at peak hour where ferried commuters glide by, seemingly immune to the harbour’s charms.
As such, this body of work has become increasingly focused on the passengers disembarking the Manly ferry on the quarter-hour. The terminal conduit through which commuters are corralled forces people of all ages, backgrounds, and walks of life into the same condensed public space. When a ferry docks, wave after wave of people come streaming through and the chiaroscuro light serves as a disclosing tool that exaggerates and magnifies the sheer chaos and multitude people caught up in this daily ritual.

Bio: Sam Ferris has been shooting on the streets of Sydney for more than 5 years. He is an organiser and co-founder of the AUSSIE STREET exhibition and competition, and is a member of SlowLight international collective. His work has been published in Photo Review Magazine, Capture Magazine, The Sydney Morning Herald, The Guardian, Lonely Planet, Fellow Traveller the magazine of China Rail, and as an Editor’s selection on Lensculture.
Sam’s images have been exhibited in two featured street photography exhibitions at Head On Photo Festival in Sydney as well as in exhibitions in Europe, the USA, and UK. He has been a finalist and prize winner at Street Photo San Francisco, a finalist in Art and About’s ‘Australian Life’ Photographic Prize, as well as a finalist in Miami Street Photography Festival and Brussels Street Photography Festival. His ongoing project on living in Sydney entitled ‘In Visible Light’ was featured in the academic text ‘Photography as a Social Research Method’ (2016), and recently alongside Trent Parke and Jesse Marlow, Sam was one of three Australian street photographers selected for the book ‘100 Great Street Photographs’ (2017), edited by David Gibson and released by Prestel Publishing. Sam holds an Honours degree in Arts and a Masters of Teaching. He is represented by Black Eye gallery, Sydney.