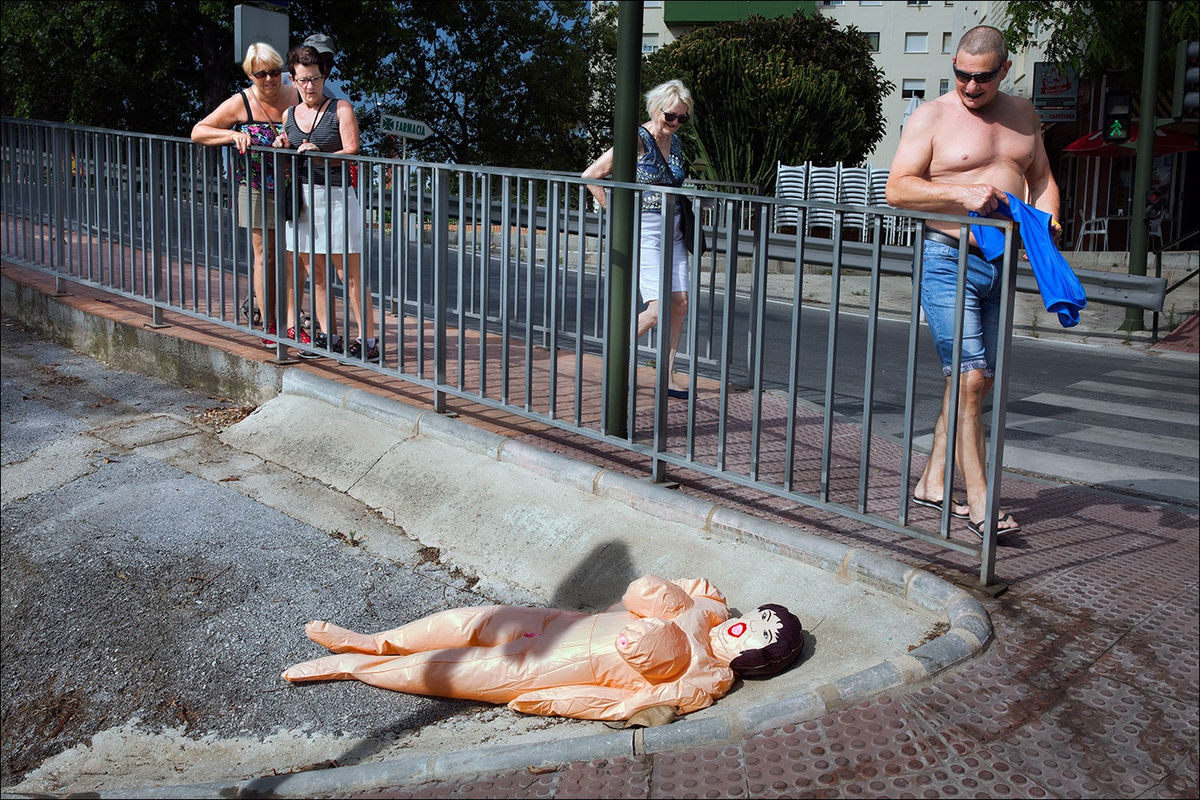 The photos are taken in Spain, both Torremolinos and Benidorm; two tourist towns.

Some people go there to let the beast out under the influence of alcohol excesses.
In the first photo, the doll was probably left behind by some of these people. The lady’s in the picture were French tourists and commented: “Someone forgot his wife”.

In the second picture, there’s a little chapel; Spanish people are still very religious, but the two ladies are more interested in a doll with no arms, someone has put there, then in the Virgin Mary.

With the third picture, I saw this guy peeling a banana and it was my intention to wait for the moment when he opened his mouth. The guy was very surprised when I took his picture, but ignored me immediately afterwards.

The fourth pic was taken on a blistering hot day with a high noon sun; no people in the streets and someone was smart to put his Smart in the black shadow of a tree; it fitted nicely. Nicolas Hayek, the Smart Car creator passed away in 2010 at age 82; his ghost seems to be present in the photo.

The fifth photo was made outside a sports store. Whenever you pass it there are always cardboard boxes in front of that billboard. On this particular day there was this black, I think plastic thing, coming out; just in front of her leg and the camera did click. (It’s Japanese)

The next was taken at a bus stop; the yellow lines on the guy’s jacket matched the street markings. You can pass the same place a thousand times and nothing happens and at once there it is.

The seventh was taken at the back entrance of a hotel. The guy tried to be helpful and gentle as he was pointed out the potential white lines on the guy’s belly, but he didn’t care much.

Bio: Peter Kool was born 1953 in the Netherlands and moved to Belgium in 1973 to work in a steel factory as an operator for 35 years to follow.
He started studying photography in 1980 at the Academy of Sint-Niklaas during evenings and weekends and graduated in 1985;
Photography is for him an ongoing quest to capture singularity in an image and to enjoy the chasing itself during the long walks on known or unknown territories.