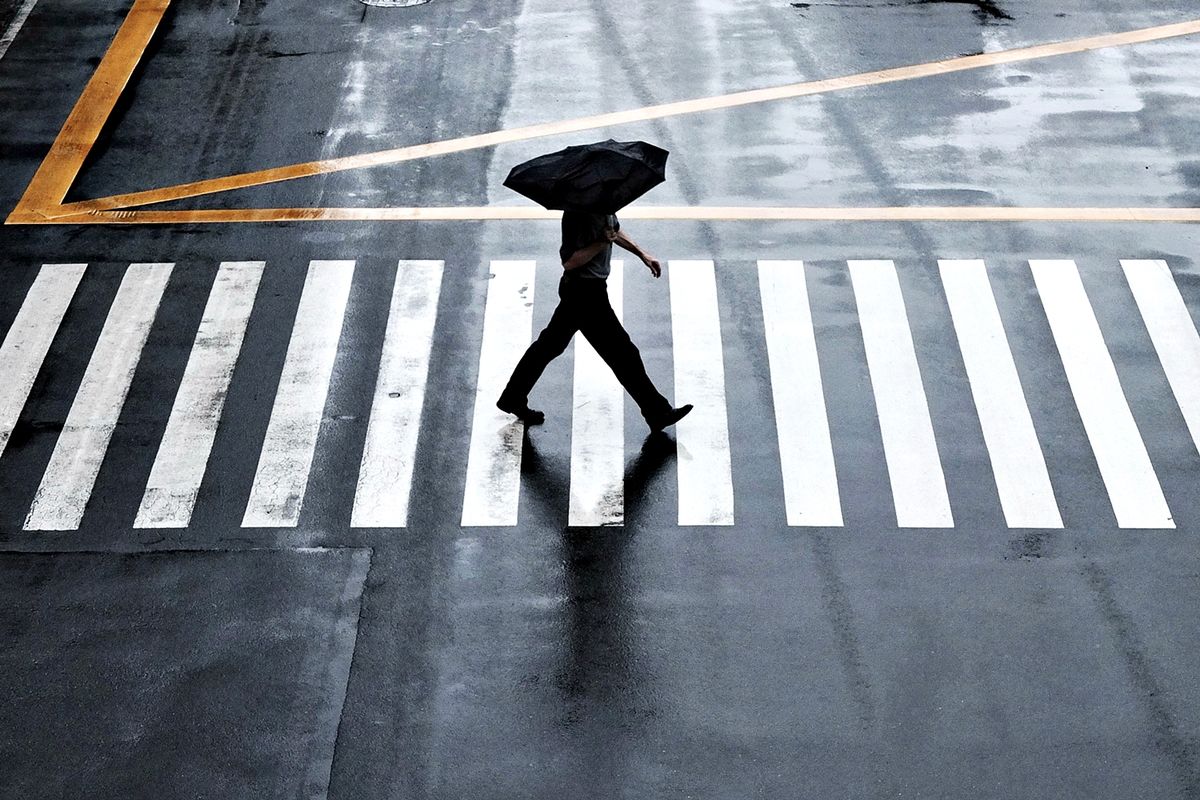 That thing called umbrella. Rain or shine you’ve seen them everywhere. The mighty umbrella will always be part of people’s everyday utility. This project presents how the umbrella provides an interesting focal point in an otherwise mundane street scene.
Photo Captions
COVER – A man crosses a pedestrian strip breaking the rhythm of the white lines with his full stride
2 – A boy struggles to open his umbrella during a night of heavy down pour
3 – A city dweller’s puddle reflection moments before stepping on a red gutter
4 – Tourists take a break during a light drizzle at a Hong Kong bay side walk way
5 – A view of a manicured lawn from a hotel function room
6 – A young lady walks leisurely by the bay side under the afternoon sun casting a magenta background on her silhouette.
7 – Yin and Yang. Two umbrellas creating visual tension in relation to a manhole lid
8 – A local market vendor at rest
9 – A lady daintily crosses the street with her parasol-looking umbrella
10 – Three men struggle to take control of their only umbrella against the strong monsoon rain
11 – Street vendors prepare for their morning grind
12 – A woman uses her umbrella as shade from the afternoon sun.

Bio: Jasper is a calm and collected street photographer who has built a name for himself in street photography and whose works have been recognized and featured by various local and international publications both online and in print. Through his street photography, he has collaborated with international private groups and non-profit organizations from Brazil, France, Ireland and New York, USA on distributing his works. His street photographs have been showcased in the global exhibit scene from Kuala Lumpur to Paris.
In the social media scene, his name has been cited in several lists from Brazil, Spain, Italy and the US of street photographers to follow on Instagram.
His street photography started as a result of reaching a plateau in his creative growth. After exploring various genres in photography, he discovered the works of Magnum photographers Henri Cartier-Bresson, Alex Webb, David Alan Harvey and Harry Gruyaert. Their style of documenting the world blew him away. These photographers became his most important influence. In 2012, in part thanks to their inspiration, he started seeing the world through a different lens. Since then, street photography has become his genre of choice.
Since 2017 he has been involved in a creative partnership on street and urban photography with Asus Philippines as one of their brand amabassadors for the Zenfone smartphone.
When he is not out there practicing street photography, he is wearing his corporate HR hat or doting on his son giving the little tyke basics on photography or simply enjoying his cup of coffee with his wife and creative partner, with his camera in tow just in case. He is a university graduate with a degree in Psychology.