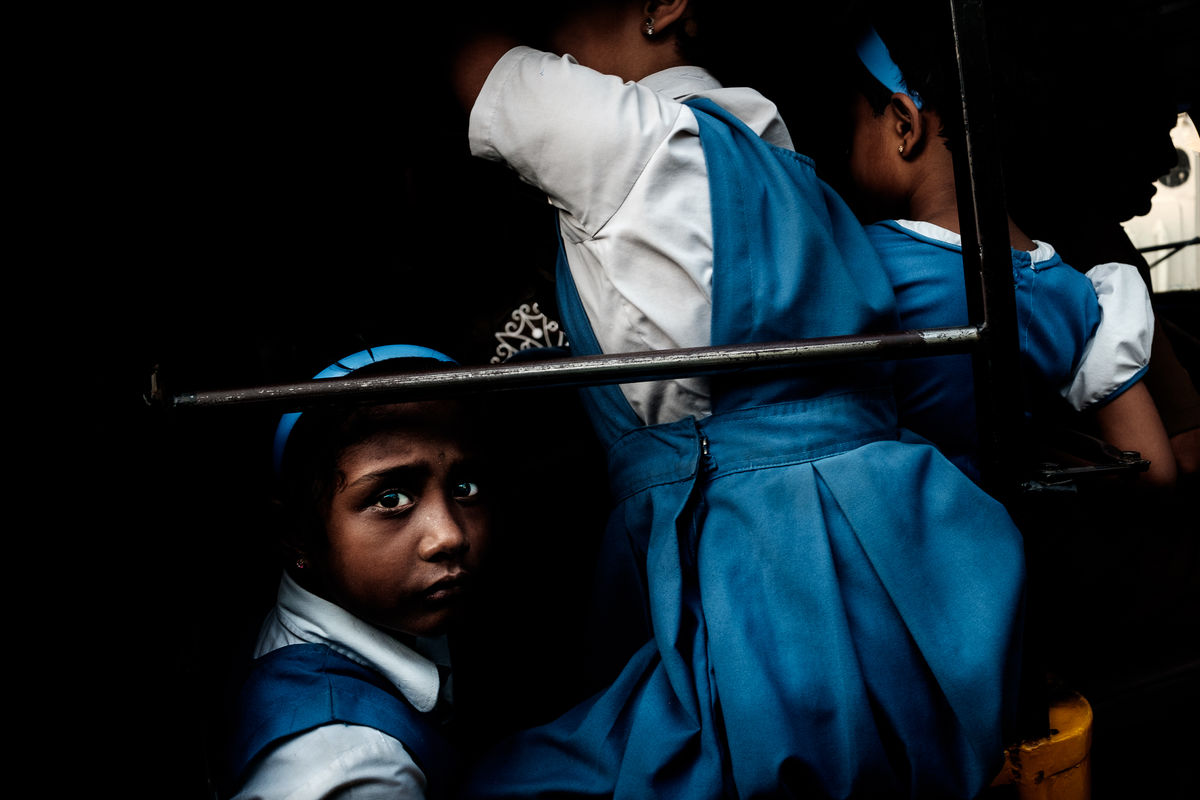 1 – 06,07 am. In the early hours of the morning, a child runs towards a small temple in the village of Pulluvapady.
2 – A mother with her children, watching TV in a typical tribal house.
3 – Portrait of some students inside a rickshaw in Salem.
4 – A portrait of a mother and her daughter, sitting in front of their house. Pulluvapady village.
5 – A group of students watches the repairs of an old electric truss in the village of Innadu.
6 – Two kids playing at sunset in the village of Pulluvapady.
7 – A typical family portrait in a house of the Pulluvapady village.
8 – Gas is a crucial element for everyday needs, but the majority of people can’t afford it because of its high price. The Indian Oil Corporation is one of the biggest gas and oil company in India.
9 – A group of people working at the river to expand its flux of water. Kurathikundaram village
10 – Father and son working at the livestock shelter on the mountains. Pulluvapady Village.
11 – Every day, two buses leave from the school of Pulluvapady to bring back children to their families. These buses travel many miles, covering all the neighbouring villages of the Kalvarayan area through rough and dangerous roads. In this photo, we can see the driver from the side, and a family heading home in the background.
12 – After a long day at work, some people of the village of Innadu find refreshments in the only store allowed to sell food products.
13 – Leprosy is still a huge health problem where poor socio-economic conditions favor its spreading. Data provided by the World Health Organization in 2017 about the leprosy situation in the world, affirm that the high concentration of the disease in 14 countries alone represent 95% of the new cases. India is at the top of the list with 135.485 cases. This couple lives in a really small house in the Kariyalur village, in extremely poor hygienic conditions. Because of leprosy, he lost all his fingers from both hands and feet. His wife is completely blind on one eye and suffers from Hypoacusia.
14 – Portrait of an orphan and disabled man from the village of Mel Vazayapady. The living conditions of a disabled man in India violate most of the basic human rights. People with disabilities are often unable to access the appropriate care, support services or to increase their autonomy by using socio-economic benefits, therefore forced to live a life of marginalization, discrimination, and suffering.
15 – Portrait of and an elderly woman. Kariyalur Village.
16 – Diwali, also known as Dipavali or Deepawali, is one of the most important Indian celebrations, usually celebrated in October or November. Diwali symbolizes the victory of Good over Evil and it is called “The Celebration of the Lights”, in fact, during the celebration, it is common to light up lights ( candles or traditional lamps called Diya). Fireworks are also used in many areas of India during the celebration. The most common legend associated with this festivity says that the King Rama, of the city of Ayodhya, returns after 14 years of exile in a forest. The people of the city, upon the King’s return, lit up rows (avali) of lamps (dipa) in his honor, hence the name Dipawali, or simply Diwali.

BIO | Born in Macerata on the 2nd of May, 1989 and living in Civitanova Marche, Italy. After Secondary School he attends the Professional State Institute of Advertising, Commercial and Tourist Services, where he graduates in July 2009 and gains a Graphic Design Operator Certificate.
He, then joins the Academy of Fine Arts in Macerata, focusing on Graphic Design. It is here that he becomes interested in Photography and Cinema. In April 2014, Giacomo graduates in Graphic Design and continues his studies in the Field of Photography and Cinema. Under the wing of the Non-profit Organization “Please Sound”, Giacomo Ilies to the region of Tamil Nadu, India, where the Organization operates the most.
To reach its purpose nationwide, Please Sound organizes and implements training and information initiatives in defense of fundamental rights. Some of these initiatives include cultural activities for kids, young men, and disadvantaged adults, as well as awareness programs. In 2017 he graduates with top marks in Photography, thanks to his photographic reportage called “On the way to Damascus”, a work of more than a year about the social situation of the “Lido Tre Archi” neighborhood.
Later in the year, Giacomo goes back to India under Please Sound for the second time. This time his job is to document the social-economic and cultural situation of the Kalvarayan Hills.