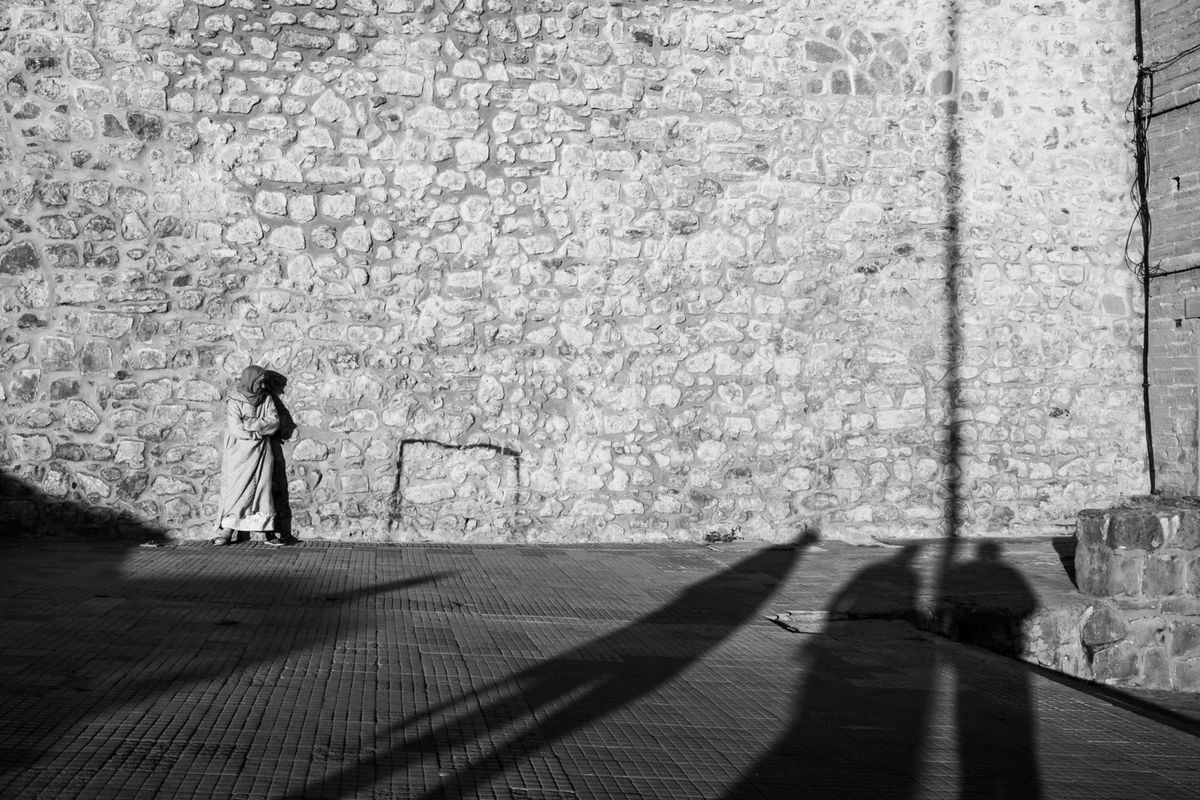 People of Rabat. Rabat, capital of Morocco. City less known than the other Moroccans, not beaten by the flow of mass tourism and much less subject to foreign influences. This photographic work wants to tell, describe the people of Rabat and, in particular, the work focuses on the people who live, work, crowd the neighborhoods of the Medina and around it. In the Medina the atmosphere is decidedly Mediterranean with white walls and blue shutters. It is accessed via the two doors Bab El Alou and Bab El Had to the east, along the 12th century Almohades walls built by Sultan Yacoub el Mansour. The Almohad wall is 5,263 meters long and extends along the western and southern coasts of the city of Rabat. The latter and its gates have been declared Unesco World Heritage. To the west, the Medina is surrounded by the walls of the Kasba degli Oudaïa. This Medina created by the Moriscos, Andalusians driven out of Spain by Philip III in the seventeenth century, is one of the few to have been well protected thanks to the many city walls. It has a traditional and authentic atmosphere and you can visit the typical souks, the Kasba degli Oudaïa, the ancient Jewish quarter of Mellah and the Makki mosque. The medina is a center of commerce and crafts that houses many shops of Moroccan crafts and inhabitants of the popular class. It is a very symbolic historical place in Rabat. Rabat is the result of a fruitful dialogue between the Arab-Muslim past and Western modernity. It contains the modernist values of urbanism and architecture such as those of the Maghreb and the Arab world, preserving the ancient city and its many historical and patrimonial components. This translates into the emergence of an original architectural and decorative style peculiar to contemporary Morocco. Rabat is a city of tradition whose most important festivals and perennial costumes are of religious inspiration. The word religion, however, does not mean ostracism or extremism. Instead, it is about expressing the joy, solidarity and happiness of being together. Traditionally curious, the Rabati people love to discover. In the souks of the old medina, you feel that the most important thing is not to sell or buy, but to talk around a cup of tea and exchange laughs and glances. The most important custom of Rabat is actually the art of hospitality. Whatever the party, the costumes, the places, the arms and the heart are open to others with naturalness and sincerity. Although the majority of local inhabitants are Muslims and religious traditions are reflected in all areas of life, the people of Rabat are friendly, socially confident and very interested in the modern aspects of life. They are extremely welcoming and warm; even a normal merchant in a store can offer visitors a cup of aromatic tea or coffee. You should never refuse it because it can be irritating to a warm guest. Very often tourists discover that the inhabitants of the city are very curious. This photographic work seeks to highlight, moments, places, atmospheres, people, who meet in the old part of the city and that represent the true identity, the true soul of this beautiful corner of the African continent.

Bio: He was born in Pescara on 20 September 1981. He began to photograph at the beginning of the second half of the 2000s, mainly landscapes inspired by love for nature and biodiversity. Over the years 2008-2011, the collaboration with the discorsifotografici.it website has been carried out for the creation of a page devoted to travel photography and paesaggidrabruzzo.com on the enhancement of Abruzzo’s territory. He began to deepen his photography, and in these years, he attended an advanced Reportage course in Rome at Photographic Offices, winning a special photo contest “Roma in a click” always at the Roman school in the same year. The human factor, investigating urban spaces, geometries, and forms of life within them are fundamental and fundamental themes of photographic evolution. This research brings him to participate in several international exhibitions (exhibition at Blank Wall Gallery in Athens) publications on several international street and black & white photography magazines (Corridor Elephant, Paris, Apf Magazine Street Photography), entering 2017 within the “Exhibit Around” (Urban and Human Empathy) with exhibitions around Europe. To date, his photographic research, which is expressed through b & w images, concerns the study of urban spaces and its inhabitants, ranging from street to social reportage.