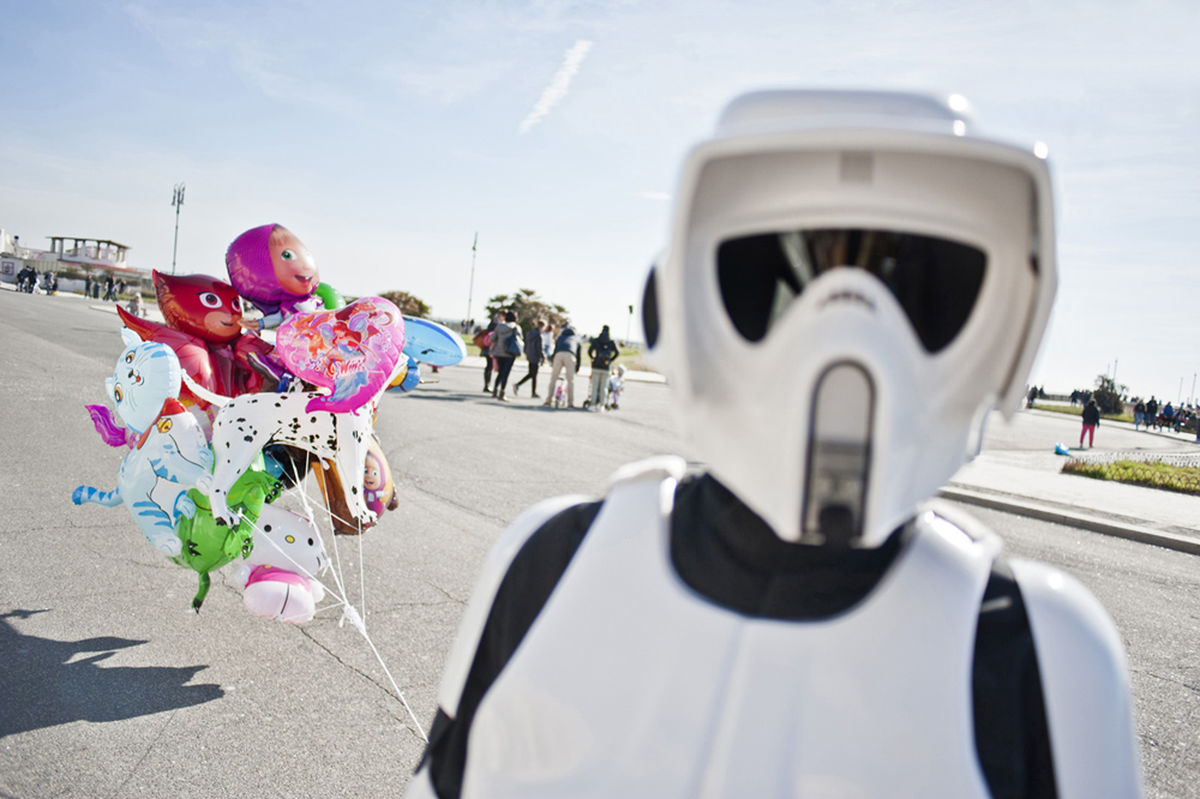 Cosplay | “Give him a mask and he will tell you the truth”, Oscar Wilde wrote this sentence which still offers us a key to investigate the human mind and our relationship with the images. Cosplay trend in Italy is now a national phenomenon, but who are these guys who dress up and often relate to the others only through the characters they represent?
Each of them has been photographed in a real place to enhance at the best the meaning of the mask, that once catapulted into reality produces a surreal element. The project tries to investigate the relationship that people have with the symbol characters of their childhood even when they are grown up through a complicated masking meant as an escape, rebellion, attempt to get in contact with the current reality and it pushes to ask ourselves how and how much our lives are full of countless invisible masks.
We usually think that the mask hides the truth of a face: what if instead, it’s the key to discover its essence?

BIO | Born in 1977 in Rome he lives in Rome, working as a photographer, teacher of photography and actor. He started to practice photography when he was 12 years old and he never stopped. After school, he worked for four years in a fine-art print lab for black and white film and at the same time working as an actor in a theatre company for 3 years. His personal research has been, since the beginning, directed towards black and white photography and fine-art print. From 2012 he begins a new art-line in colors. The look, the cut, the choice of the framing has always been “a moment of cinema”, never a decisive instant, but time is taken, a music break…
Today his personal research is developed between photography and cinema. His research has always been developed as a performance, mixing the writing, theatrical construction and acting, linking all with the photographic atmosphere. In 2001 he founded the group of photographic research NUOVAFOTOGRAFIA With A.Calabresi Alessia Cervini and Fabio Severo. In the same year, he studies with the great photographer Arno Rafael Minkkinnen. This experience changes completely his vision of the image. In the years he studied with Manoel De Oliveira, Marco Belloccio and Abelardo Morell. For this last one, he worked as an assistant in Rome for the project Camera Oscura.
In 2005 he is one of the lead actors in the film “Tickets”, directed by Ermanno Olmi, Abbas Kiarostami and Ken Loach presented in the cinema festival of Berlin.
From the experience of the film in 2007, he publishes his first book Viaggio and participated as a member of the jury at the Cinérail Féstival 2007 in Paris. From 2012 he began collaborating with several magazines as Left, Internazionale, and Repubblica. His photo projects have been presented in many festivals of photography and in 2014 he has been a member of the RCC film festival in Cannes. He is currently teaching History and Technique of Photography in different realities in Rome as the Palazzo Delle Esposizioni. From 2015 he is a teacher of photography in a psychiatric community. He has been a member of the jury for short and long film festivals, in France and Italy. He usually works on long-term projects. “European Tales” (1998-2002), “Portraits of seas” (2009-2012), “Parallele Streets” (2011-2012), “Chinartfashion” (2014-2015). Cosplay (2018). In 2018 he realized as director the short film “Your Eyes”.
“Anything before the shot is the basis for the picture coming to life”. From that moment on, the look goes forward. Like a frame taken from a cinema sequence, it cuts past and future.