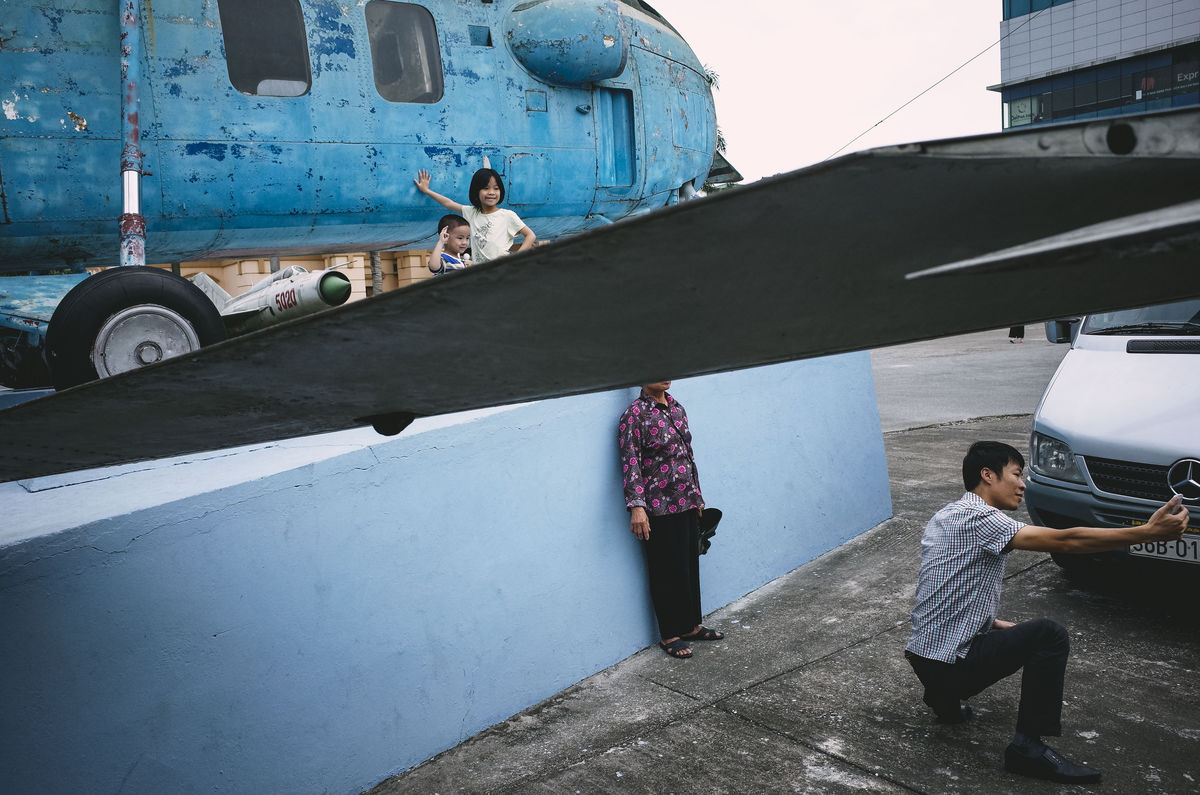 Street photography project – kopoogoo (TÉNG BẾU). 1. (Cover) This photo is taken during I participated “Canon Marathon Vietnam” contest. That topic which I need to shot is “Proud of Vietnam” so I decided to go to Air Force Museum of Vietnam. It was a Saturday therefore many people visited there. I have been attracted by the huge blue helicopter and at first, I waited for a soldier with blue uniform for matching color photograph. However, when I saw a family taking a selfie, I immediately chased them, waited and took some shots. In this photo, the men took a selfie with his kids and his mother.
2. The scene in this photo is Hoi An street. I took it during my honeymoon trip to Da Nang city. If you have been travelled to Hoi An, you would know Hoi An is famous for its yellow hue. Yellow is my favorite color for its mixture of calm and dynamic. You can see in this photo a couple sit by the window taking the wedding photo. I have waited until the little girl come across with the red jacket because I want to match the color of two lamp in the window with something in that scene.
3. Dogs are my favorite subject because I love animals. And I have inspired by Elliott Erwitt with his wonderful dog photos. I took this photo when I walked around the park. The dog stand in the wall kept barking me when the other dog run around and tried to jump on his boss.
4. Hanoi is growing fast with mass housing projects are being built to cope with the expected the growth in the city’s population. Consequently, there are fewer playgrounds for kids. In this photo, you can see the kids play football and basketball beside the shopping house.
5. Nearing my house is Thanh Nhan Park. In the summer, I often do the exercise after work. I have taken many photos of people at Thanh Nhan Park with my little RICOH GRII.
6. Light, shadow, and the part of the men visible are attracted me. I took this photo when I walked around my house.
7. Another photo that I took at Thanh Nhan Park. The man in this photo tossed his dog into the lake to bathe it because his dog is afraid of water.
8. In Hanoi, you can see many people go into park and fishing there. I have surprised because those lakes locating in Hanoi’s parks have large amount of fish. In this photo, you can see two guys are fishing and the girl in the red t-shirt sitting near the lake. At that time, she was talking on the phone with someone and cried a lot. Maybe it a typical afternoon at the park in my lovely Hanoi city!
9. This photo is taken during my trip to Japan. In this photo, a couple are taking selfie under the water.
10. In this photo you can see those kids are very excited when playing with the old canon which used during Vietnam War.
11. I took that photo on the train to my hometown Haiphong city. I love to travel by train because I can easily move through the train and taking photos.
12. Another photo that I took at Air Force Museum of Vietnam. Those kids played around the body of old helicopter used in Vietnam War.

BIO | My name is BUI TIEN born in 1990, live in Hanoi city, Vietnam. I’m a lecturer, working at the military university. At this time, I have been studying for my Ph.D. thesis. My Instagram account is TENG BEU.
“Buy a good pair of comfortable shoes. Have a camera around your neck at all times. Keep your elbows in. Be patient, optimistic and don’t forget to smile.’ It’s simply what I do in my free times. Some people walk round for shopping, some people take a dog for a walk. I always walk with my camera because I’m curious about things and people around me and I want to record it. It is my visual diary. I also feel a responsibility to continue doing it.
My favorite street photographers are: Cartier-Bresson, Alex Webb, Saul Leiter, Elliott Erwitt, and William Klein. I think I have learned many lessons through observing their photos.
I live in Hanoi city and most of my street photographs are taken there. I know Hanoi well and although it’s a big, crowded city, I try to isolate scenes fairly. However, Hanoi streets are too messy and crowded for me. I don’t like clutter in my images. Too many people require a greater orchestration and luck. Therefore, I like to go to park or museum for taking photos.
I believe that when shooting there is a mindset or zone, where you’re operating at a heightened state and working instinctively. Maybe my themes have shifted over the years but my basic approach has always been ‘I’ll know it when I see it’ and I always take photographs that are pleasing to myself. However, I do carry in my head ideas, hopes and a sense of what is possible, what luck might provide. Essentially, I go looking for ‘my’ photographs. And within the ones that work there are certainly recurring themes and styles. So I seek elegance, graphic shapes and often a sense of a story going on. I like photographs that draw you in, that surprise and delight and have you asking ‘what is going on here?”